It’s turning out to be a busy summer at the Restoration Trust…..

Culture Quest works. “I like being in a group of people in different situations. I also like the variety of music.” Members listen to everything from Beethoven to Hip Hop via Bond theme tunes and mixes by a DJ participant. The Eastern Daily Press, which has an excellent mental health focus, published this story in June. Dave Pullin, the musician and mental health professional who runs the group, is shown in action at Norwich Arts Centre, playing music suggested by one person so that everyone can listen.

A Max Richter gig at the Theatre Royal in the Norfolk and Norwich Festival was the first time one person had been to a concert for 30 years, and a lunchtime concert by the Britton Sinfonia was the first time one person had heard a full orchestra live. And we’ve just had a fantastic workshop with pedal steel guitar legend B J Cole, whose opener was Elton John’s Tiny Dancer; B J described that 1971 recording session – summoned at 4pm, they emerged at 6am, B J’s beautiful sounds rippling through a song which has sold more than 200,000 copies.

Preliminary research evidence indicates that CQs model of sharing music in an active listening group is positive for mental health – and it doesn’t cost much – £6.50 per person per hour. So we have applied for a grant to continue the sessions for another year, and we hope to run more groups with Julian Support in Suffolk. We want to make a business plan for a sustainable programme that can be commissioned by mental health and social services, or paid for directly by participants’ personal budgets.

Change Minds “has been awesome!! Thank you ☺” That’s what one of our Year 1 group said about Change Minds so far. Here we are in the Eastern Daily Press again, this time a full feature.

We’ve got a pop-up exhibition in the Long Gallery at Norfolk Record Office, the Year 1 group are booked in for a Book Binding workshop with the NRO conservator, we are recruiting Year 2 participants with the help of Together support workers, and we’re running two Heritage Open Day workshops at the Record Office on 8th September. Oh, and Norman Lamb MP is visiting us for a Change Minds session in November.

Change Minds Cromer, our spin-off partnership at Cromer Library with Norfolk Library and Information Services and Norfolk Community Learning, is well underway. The latest session on research and on-line resources led by Linda Tree, Community Librarian, saw people tracking the person whose case record they are reviewing through the archives. Soon they will be learning about oral history and doing creative writing.

Voyagers, a group of women who were members of Voyage With Me, had our first art gallery trip – we plan to do 6 a year, including one long-distance jaunt. Eight of us went to the British Art Show at Norwich Castle Museum, which was pretty interesting.

Here’s a still from Rachel MacLean’s supersaturated world. Our next trip in September will be to the park at Houghton Hall – James Turrell etc, and Veronica Sekules’ new gallery in Kings Lynn, Groundwork, showing Richard Long and Roger Ackling. 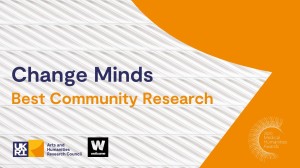